Almost a quarter of a century has passed since our first catalog in 1998. The world has changed  over these years, but neither crises nor pandemics affect our way of life. Our priorities remain the same – flowers and traveling. Being students, we traveled the Caucasus, Central Asia and the Russian Far East. We have been interested in the diversity of wildlife since our childhood, so we usually travel in pairs to visit where we like it most and see what interests us most. We have visited many continents, we have been to many natural areas, from moist tropical forests to deserts and taiga. Many of childhood dreams of seeing the largest flowers in the world – Raphlesias, the largest trees in the world – mammoth trees, baobabs and lemurs in Madagascar, the most beautiful butterflies in the world in New Guinea, unique animals in the Galapagos Islands, the Amazon jungle, Komodo dragons or forests of Yuccas have come true. But the world is big and very diverse, there are still many places we want to visit. In 2020, all our plans were ruined by the Covid-19 pandemic, but we are delighted to be able to see early spring in Israel and Jordan and autumn in Crete, even in these difficult times.

We started collecting plants more than 30 years ago. Over the three decades, more than 17,000 species and varieties of plants have grown in our collection. We have grown a wide variety of herbaceous plants that can overwinter in Lithuania. We had collected a lot of poaceae family plants, alpine plants, wintering succulents. Most of these plants continue to be grown by our daughter. Her website is Naudingi Augalai. About six years ago, we started a much narrower specialization. The main groups of plants we grow remained daylilies, phloxes and beardless irises. Hostas, primulas, houseleeks, lilies, tall bearded irises, tree peonies and some rarer plants such as epimediums and adonias also remain as minor groups and gradually expand.

At present, we have accumulated one of the largest daylilies collections in Lithuania and Europe. It covers 2,000 varieties. In the future, due to the lack of space, the number of daylilies varieties will not increase much, as we begin to abandon some of the older and already bored varieties of flowers, but we acquire the latest varieties of famous breeders. The collection has also begun to be replenished with new breeded by our own. Ten years ago, Victoria, showed interest in daylilies breeding, she began to interbreed herself and she grows several thousand of seedlings each year. However, breeding is a painstaking and time consuming job. After the first blooming about 95% of the seedlings go to compost. The rest are grown for at least another 4-5 years. During that time, some of them appear to be frost-resistless or have other defects, such as loose stems or sparse blooming. Therefore, after many years, only the best remain. Finally, in 2020, Victoria registered 6 of her breeded varieties with the American Daylilies Society (AHS). 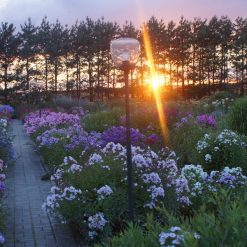 s have long been Kęstutis’ favorite group of plants. In a few years, perhaps the largest collection of phlox varieties in Europe (more than 1,900 varieties) has been collected, but the limit has been reached when it has became very difficult to get something new. We currently have about 1,500 varieties growing here, as we have begun to abandon some very common, as well as non-viable and difficult-to-grow varieties. Only the most beautiful, well-growing phlox varieties will remain in the future.

The latest Kęstutis’ passion is beardless irises. Although we have been growing Siberian irises for more than 20 years, their collection started to expand only 7 years ago, when we acquired the latest varieties of Siberian irises at that time and became interested in water irises and the new Iris x pseudata group of irises. In particular, the collection of beardless irises expanded in 2019-2020. We started collecting varieties of Iris Spuria and Japanese groups. We pay a lot of attention to wild species of beardless and bearded irises. We started experiments with irises of the groups Oncoccyclus, Regelia, Psamniris, Arilbreds, Lophiris, and Louisiana.

For many years now Victoria has loved lilies. At first, she only collected them. It is about 20 years now since she started their breeding. During that time, she brought out many 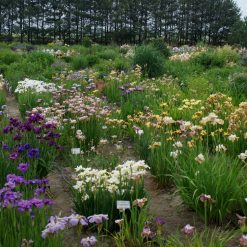 beautiful varieties of them. Varieties bred by Victoria currently are mainly grown in our collection. Almost all lilies in the LA and OT groups had to be abandoned due to the spread of a virus. Over the last few years, we have acquired a number of new varieties of wild lilies (Lilium martagon).

Victoria’s desire for breeding does not fade throughout her life. In addition to lilies and daylilies, she has bred several other plant varieties. She has bred a dwarf, compactly growing heliopsis  ‘Debesėlis’, as well as two beautiful and well-growing in Lithuania forms of lavender. She selected a spontaneous mutation of fibrous yucca called ‘Ananasas’, which is probably the most beautiful and best wintering of yucca grown in Lithuania. Victoria has also selected some very beautiful Echinacea and Baptisia seedlings to be registered as varieties. Victoria is most proud of her tree peony seedlings. The breeding of them lasts the longest. It often takes 7-8 years and sometimes even more from seed to blooming. Several forms bred by her are characterized by huge full blooms and very abundant flowering.

Over more than 20 years, the circle of our clients has expanded too. In 2015, our website in English daylily-phlox.eu was launched. It is not only an online shop, but also a gallery of most of the collection of plants we grow. At present, the plants grown by us grow in almost all the European Union countries, except three countries in the south, such as Greece, Malta and Cyprus. The plants also grow in the United Kingdom, Switzerland, Serbia and Russia.